Writing on the history of his kennel, Michael Collings provides his perspective on breeding and “dominant” dogs, including Purston Give ‘em Grief the sire of Ch. Purston Take Off and Crufts BIS winner Ch. Purston Hit And Miss From Brocolitia:

“What makes a great stud dog or brood bitch? If anyone knew the answer to that question he would be a wise man indeed and there would be no need for article like this. It seems such a common-sense thing and yet, those of us involved in livestock breeding know that there are no hard and fast rules. There is a lot of guess work, a lot of luck and in some instances, a strong ‘gut’ reaction. Sometimes there is no rhyme or reason; you just do not have an explanation.

A classic example for me goes back to 1978. That year I owned the ‘Top Dog’ all breeds in Britain, Champion Groveview Jubilee a Welsh Terrier bitch. Her record in the ring that year was enviable: 13 Challenge Certificates, 13 Best of Breeds, 13 Terrier Group 1st places, 5 all breed Best in Shows and three reserve all breed Best in Shows. I sold her after a year long campaign based on a gut feeling. I didn’t think she would breed, even though I never mated her. She was subsequently mated many times to proven dogs but never produced a puppy.

If we look at stud dogs, there are many things to bear in mind: firstly a stud dog is only as good as the bitches that are brought to him, secondly you do not need a piece of paper. If pedigrees were the answer our task would be very easy. One of the most common mistakes breeders make is to go to the winning dog of the moment. In their eagerness, they sometimes fail to see that the winning dog does not produce himself—he himself is produced! Do not rush to use the current winning dog; do so at a later date—maybe! But mate to the dogs which have produced that winner. Many dogs that have produced top quality offspring are never given a realistic chance of being great because of the short-sightedness of many breeders who fail to see beyond what has been produced.

Sometimes personalities blind us to a dog’s full potential, because we have reservations about a particular owner and it clouds our objectivity. Do not look at people when choosing a stud dog, you are not using them on your bitch. The really successful breeders are those who do not think they have a monopoly in a breed, but realize that sometimes they need that which a certain sire or kennel produces. Never stop looking at other peoples’ animals.

Occasionally a dog comes along who is a ‘dominant’; he reproduces to many lines and establishes a type or family resemblance. He is like a photocopier. These rare and exceptional dogs are worth their weight in gold. These dogs do not need line breeding; they do not appear to need outstanding show bitches. In some strange way they are once in a lifetime dogs; not necessarily the greatest dogs the breed has ever produced, but they themselves have the ability to produce quality.

A few dogs come easily to mind because I exploited their potential as great producers and wrought on the anvil of my own personal experience. The first is a truly great, dominant stud dog who belonged to my good friend Sylvia Hearsey: the Westie, Champion Pillerton Petermun. I used this dog with great success on bitches I had nothing to do with. I invariably looked at his puppies and was never disappointed. I sent to America six BIS Westies sired by this dog. That is what I mean by dominant.

Another dog who was not just a great producer but came from a kennel which produced year in and year out was the Airedale Champion Siccaway Galliard. He was bred by Clare Halford, the greatest Airedale breeder Britain has ever produced and who was responsible for many improvements previously lacking in the breed. Clare Halford bred the 1961 Crufts BIS winner Champion Riverina Tweedsbairn. Galliard was a line bred dog; on paper superb. Again he was dominant.

The third and last dominant dog I would mention is my own Welsh Terrier, Purston Give ‘em Grief. He too was capable of stamping himself on the breed and to bitches from various lines. He has produced many Champions and BIS winners. His litters are a revelation, as you invariably are not looking for one to keep; the problem is which ones to let go. His impact on my bitches and kennel cannot adequately be measured. The top terriers in Britain fort the past three years were sired by him, including the Crufts BIS winner 1994 [Ch. Purston Hit And Miss From Brocolitia, “Buttons”].

For me his best offspring was the top terrier in Canada in 1993 Champion Purston Take Off, “Wendy,” owned by Tom and June Fraser.

A great stud dog is one who can produce breed type in abundance and establish that type in subsequent generations, a dog who can do this for bitches of varying bloodlines and of questionable quality. A pedigree may look nice but sometimes it is not worth the paper on which it is written. It is what I see with my eyes and feel in my heart that determines if for me. If it so happens that the paperwork complements the mating, then that’s a bonus.

There are no hard and fast rules when it comes to brood bitches. One thing for sure, they are not BIS winners! BIS—winning girls may occasionally come up trumps, but it is the true breeding bitch that is the strength of any kennel. Again great brood bitches, like great stud dogs, are rare. I have encountered many well-known kennels with large numbers of bitches whose owners will readily admit that it is only one or two of those bitches which produce the quality. The problem which faces us all whether we are established breeders or novices, is the simple fact that we don’t now which one it will be! Some time ago a Wire Fox Terrier was bred in Britain and became not just a big winner but the most expensive Wire ever sold from those shores. The people who bred this dog were novices and once the dog started to win big, they came round the shows carrying the dam, a bitch of not very complementary distinction. When breeders saw the bitch they could not believe that such an animal could have produced a dog of quality—but it did. You never know.

For many years I have been a relatively successful breeder, if I had a simple recipe or formula it would be great, but I haven’t. What I would advise is to look for breeding stock, a dog or a bitch, that comes from a dominant line, whether it is the dog or the bitch who is responsible. Look at dogs three dimensionally, with your eyes, heart and mind. I follow my own guidelines when I choose a dog or bitch for these are some faults which I cannot live with. If you are looking for perfection, then perhaps you should be involved in an exact science and not dogs. Try to buy the very best bitch which you can afford, not necessarily a show bitch. Try to use the best producing dog available, with the emphasis on producing. Try always to remember that one of the most important commodities in breeding is temperament—you are going to produce a lot of very nice pets in your doggy lifetime.”* 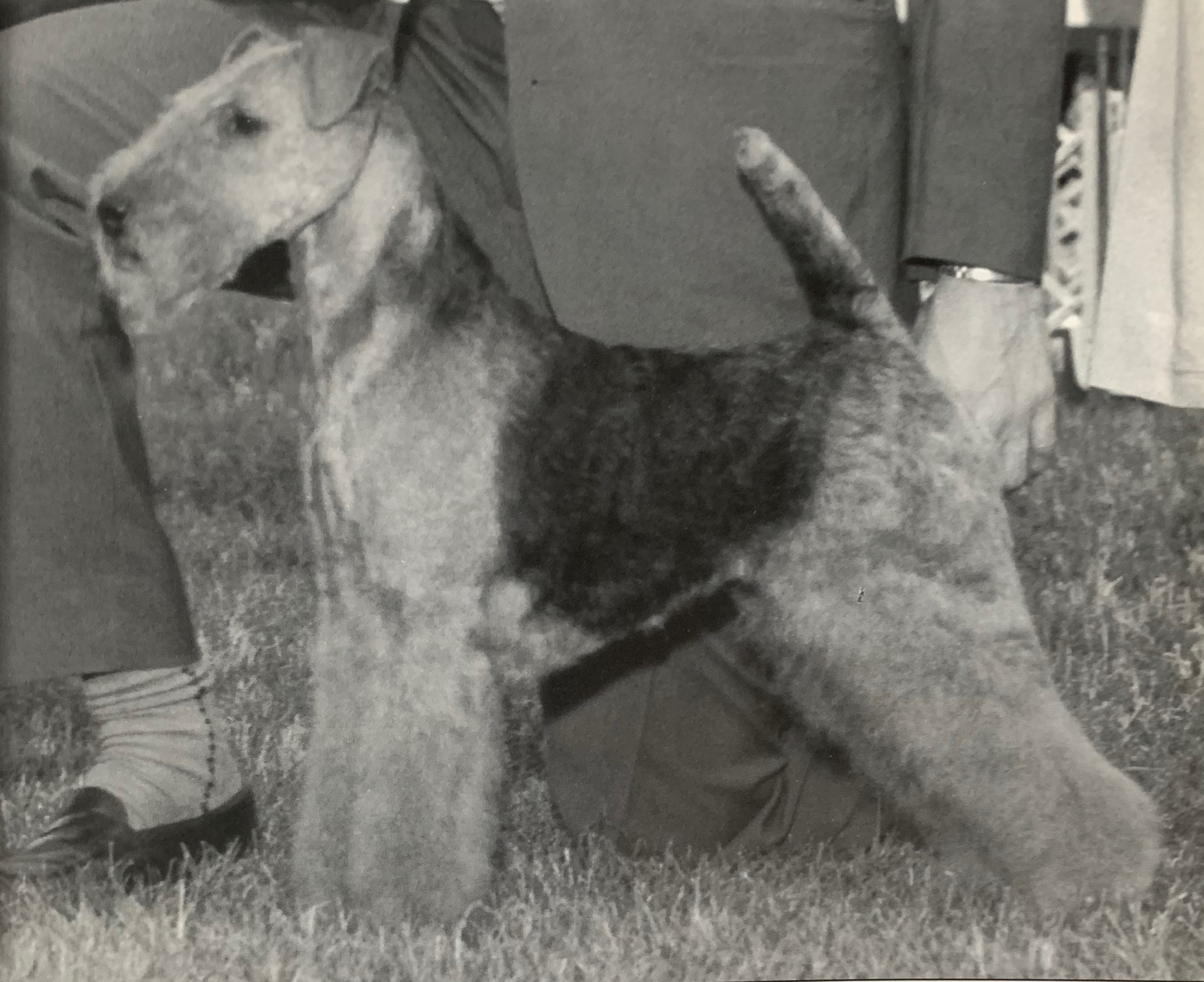