Michael Collings first saw “Jubilee” on a table at a dog show. He thought she was a beauty and negotiated with Mervyn Pickering for her. He kept her back for six months to prepare her and took her to her first show judged by Walter Bradshaw. Judge Bradshaw gave her the breed over roughly 75 other Welsh Terriers. Handled by Ernest Sharpe, she subsequently won the Group, and then Best in Show. From then on, she kept winning.

“Jubilee’s” record in the ring that year was enviable: 13 Challenge Certificates, 13 Best of Breed, 13 Terrier Group Firsts, five all-breed Best in Shows. Over her career, out of 26 all-breed championship shows, “Jubilee” won half the Groups offered, five Best in Show wins, and three Reserve Bests, plus the National Terrier Show. She became the Top Dog All Breeds in 1978, a record no Welsh Terrier has beaten.*

For Michael Collings, breeding is three-dimensional. He sees himself as an extension of the dogs. His description of seeing “Jubilee” is telling:

“For some time I had been fascinated by Welsh Terriers as it appeared there were always nice ones turning up in the show ring. About this time I was at Darlington Championship show and saw Brian Rodgers with a quite wild but great looking Welsh bitch. I asked Brian if I could take a look at her and he said it would be OK, but added that she was a bit unruly, especially on the floor.

I was very impressed and was told she belonged to Mervyn Pickering (Groveview Welsh). Mervyn wasn’t at the show but I knew him and also had his phone number. Before the day was over she was mine and came to the kennel at Hest Bank.

She was a star dog, quality and personality to burn, but she needed about six months hard work before we felt she would be ready to take on the world. She went after a few weeks of rigorous leadwork [sic] to the best terrier presenter it has been my privilege to know, Ernest Sharpe. So the die was cast.

She was the top dog all breeds that year, my first Welsh and such a big winner—confirmation that in Welsh if you have a good one you can win. It is perhaps significant that ‘Hit and Miss’ Ch. Purston Hit And Miss From Brocolitia, ‘Buttons,’ who was the third of only four Welsh Terriers to win Best In Show at Crufts, 1994 was also the first Welsh owned by Mrs. Maughan and ‘Leading Lady’ one of the earliest owned by Mrs. Halliwell. So if you are thinking of Welsh Terriers as a breed for you, take it from me, you will be given a very warm welcome and every encouragement.

You will have gathered that this first Welsh of mine was Ch. Groveview Jubilee. Shortly before we started her show career I received a call from Mervyn saying he thought he had a better bitch and if I wanted to look at her she was for sale. I thought I had better go and check it out because if he did [sic] then she must be perfect.

As it turned out I wasn’t as impressed as Mervyn but in the corner of the kennel I saw a young dog and asked to look at him. I liked him and before many minutes had passed I was shoveling snow to make a path to watch him walk. Liking what I saw, he was duly bought and set off for home with me.

The dog turned out to be Ch. Groveview Minstral of Purston, a very nice size dog, lovely type and very sound. If anything a bit dead in head, by that I mean he didn’t look real sharp, but he was as steady as Conway Castle.

That year he and ‘Jubilee’ won 23 of the 26 CC’s on offer, but he was never able to beat her for the breed, she always had that little bit extra.

To everyone’s amazement, after Crufts in 1979 I sold ‘Jubliee’ and I can still hear people saying, “How could you let a bitch of that quality go?” I had never mated her but had a strange gut feeling that she was not going to make a great brood bitch. The amazing thing is that, mated to many proven dogs, she never produced a single puppy.

The Minstral dog was different, there was something that seemed timeless about him. Several people used him before he was sold to South Africa where he got his just desserts and was dog of the year there for Rod and Connie Jarman.”** 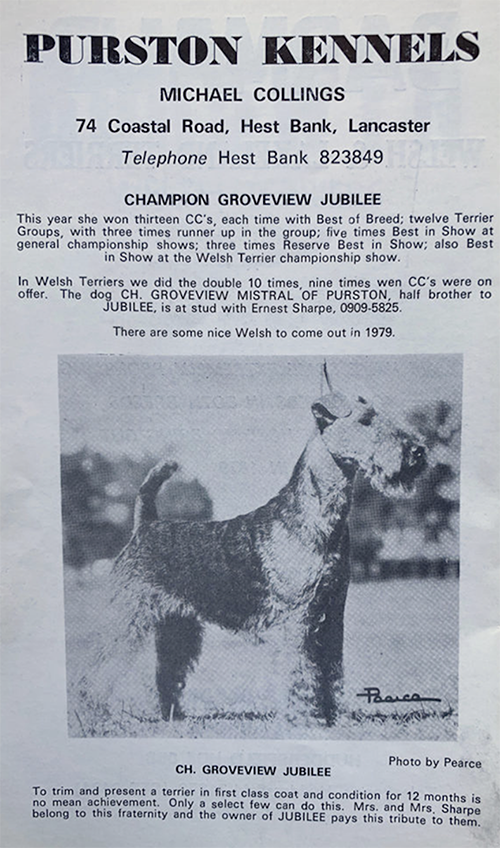