“In the early days,” he wrote, “two dogs named General Contour and Ch. Mawddy [sic] Nonsuch did a lot of winning. They were both English dogs, quite devoid of Welsh Terrier type, and even as terriers possessed of serious faults. The former was a truly awful looking specimen, probably the product of a Manchester, Yorkshire, Fox-terrier [sic] cross; he had a fairly long head, and was a showy sort, and was therefore nearly always put above the bonâ fide article with his short wedgy head. He apparently, however, did not deceive breeders, for one hardly ever, if at all, sees his name in any pedigree. Almost the same remarks apply to Mawddy [sic] Nonsuch, reported to have been bought for £200 by Mr. Edmund Buckley from Mr. A. Maxwell.

This dog was not a bad-looking terrier, but he was what is called a ‘flatcatcher’ [a British term meaning swindler or referring to a horse that looks good but is not]; he was blue in colour, having the inevitable accompaniment of a soft silky coat, and he was short of substance throughout. Fortunately his name only appears in about one place in the pedigrees of the present day. These two terriers used to be shown a great deal in Wales, especially when Englishmen were judging. The danger of their being used much at stud must have been serious; it is, indeed, a great mercy that they were either not used, or that, if they were, results were so appalling that no one but owners and their immediate friends ever had an opportunity of inspecting them.

Undoubtedly the best terrier shown at first was Mr. Dew’s Champion Topsy; she was a sound-coated, well-made animal; her colour was very good, and for a pure breed she had quite a long, good quality head. Her name is to be seen constantly in the pedigrees of our best terriers of to-day [sic], and there is no doubt she did the breed an immensity of good. Another beautiful little terrier living in those days was Ch. Bob Bethseda; he again was possessed of perfect colour, and his body, legs and feet, coat, and general make and shape, could not be improved upon. His head, however, was very short, in consequence of which Mawddy [sic] Nonsuch was, as a rule, placed over him, though it is almost certain Bob was the better terrier of the two in every other point. Bob Bethesda belonged to Mr. Edmund Buckley, master of the Buckley Otterhounds, with which pack he was regularly worked until the day of his death, he being unfortunately pulled to pieces by them [Bob Bethesda mistaken for an otter].”* 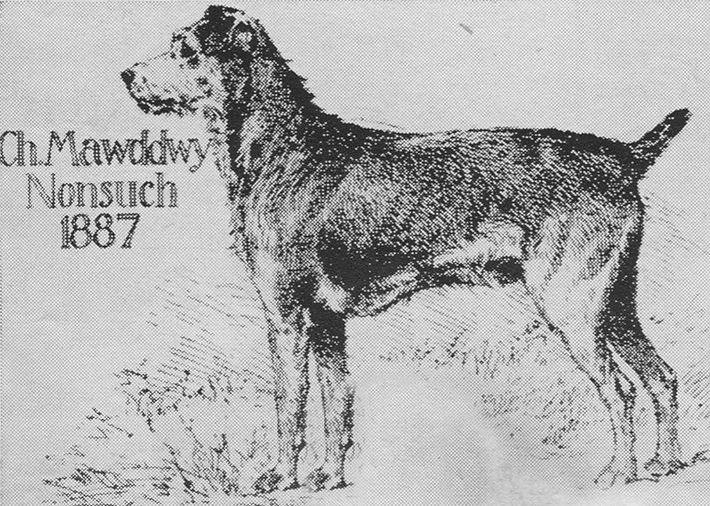 *Published in Robert Leighton, The New Book of the Dog: A Comprehensive Natural History of British Dogs and Their Foreign Relatives with Chapters on Law, Breeding, Kennel Management, and Veterinary Treatment (London: Cassell and Company, Limited, 1911), Volume II, Chapter XXXIX.