The American Kennel Club provides a history of Earthdog on their website (https://www.akc.org/sports/earthdog/history/). The roots of the program go back to the beginnings of small game hunting. “Farmers and hunters used the small terriers and Dachshunds to pursue vermin to its lair and then to follow the game into the ground. These dogs had to possess not only the physical attributes that would allow them to descend into the animal’s den and to battle the animal on its own terms, but they needed the courage and mental abilities to accept the challenge of subterranean pursuit.”

WYSIWYG YSGLEFRIO YN GWRTHDRO RN ME EE CA SWN SCA RATCHX4 DJX FDC CG CGCA CGCU NTD “BONNIE BLU” or “BB” holds the record for highest achievement for Welsh Terriers in Earthdog with the title AKC Endurance Earthdog, earned in 2018. She qualified by earning awards five times in both the Senior and Master Earthdog classes at the same event. The double-Qs can be hard to come by, but “Bonnie Blu” completed her title in one year.

“Bonnie Blu” is a versatile Welsh Terrier who enjoys many types of performance events. She especially loves sports that involve finding the rats. She earned the Barn Hunt Association’s Championship (RATCH4) and the Crazy 8s Gold (C8ZG) titles, and the Certificate of Gameness (CG) title from the American Working Terrier Association; the AKC Farm Dog Certification (FDC) title; the AKC Rally Novice (RN) title, AKC Coursing Ability (CA) title, AKC combined Scent Work Novice (SWN) title with the attainment of Container Novice (SCN), Interior Novice (SIN), and Buried Novice (SBN) and of late, the Container Advanced (SCA) title. Her obedience awards include the AKC Canine Good Citizen (CGC), AKC Community Canine (CGCA), and AKC Urban Canine Good Citizen (CGCU) titles. “BB” is a Novice Trick Dog through DMWYD (Do More With Your Dog). She is the first and only Welsh Terrier to have earned the Dock Junior Excellent (DJX) title, achieved in 2021 from North America Diving Dogs. In 2020, “Bonnie Blu” took a break from competition to whelp and raise a litter of eleven puppies.

The name WYSIWYG YSGLEFRIO YN GWRTHDRO is derived from an English acronym and Welsh translations, i.e., Wysiwyg—the kennel name of Lucy Bailey and Linda Schulte meaning “What You See Is What You Get”; Ysglefrio, meaning “to skate,” YN meaning “in, at, or into,” and Gwrthdro, meaning “backward” in Welsh.

“Bonnie Blu’s” sire is Wysiwyg Sgamio Cyfrwys and dam, Wysiwyg Arglwyddes Delyth. All the puppies in the litter were whelped during the Opening Ceremony of the 2014 Winter Olympics, and subsequently temporarily named after USA winter athletes until their final placement with their owners. “Bonnie Blu” was named after the speed-skater Bonnie Blair. One of “BB’s” siblings, AGCH MACH5 WYSIWYG TROUBLE HAS ARRIVED MXG2 PDG MJG2 PJS MFS TQX T2B5 CGC TKN, “Patrick,” (who was temporarily named after the Olympian Bode Miller) is also a Welsh Terrier Record Holder,  the First Welsh Terrier AKC Agility Grand Champion, awarded in 2020. 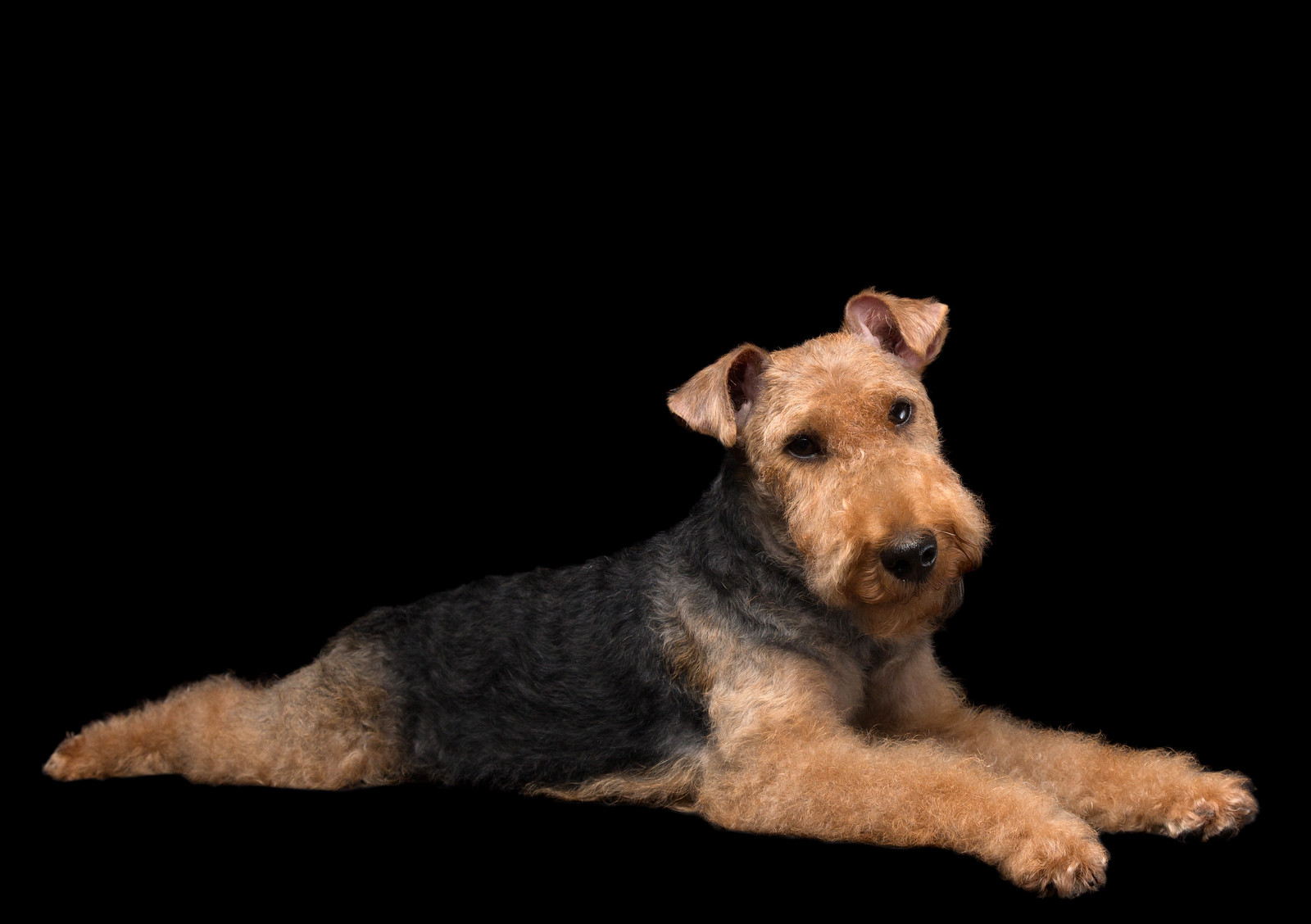 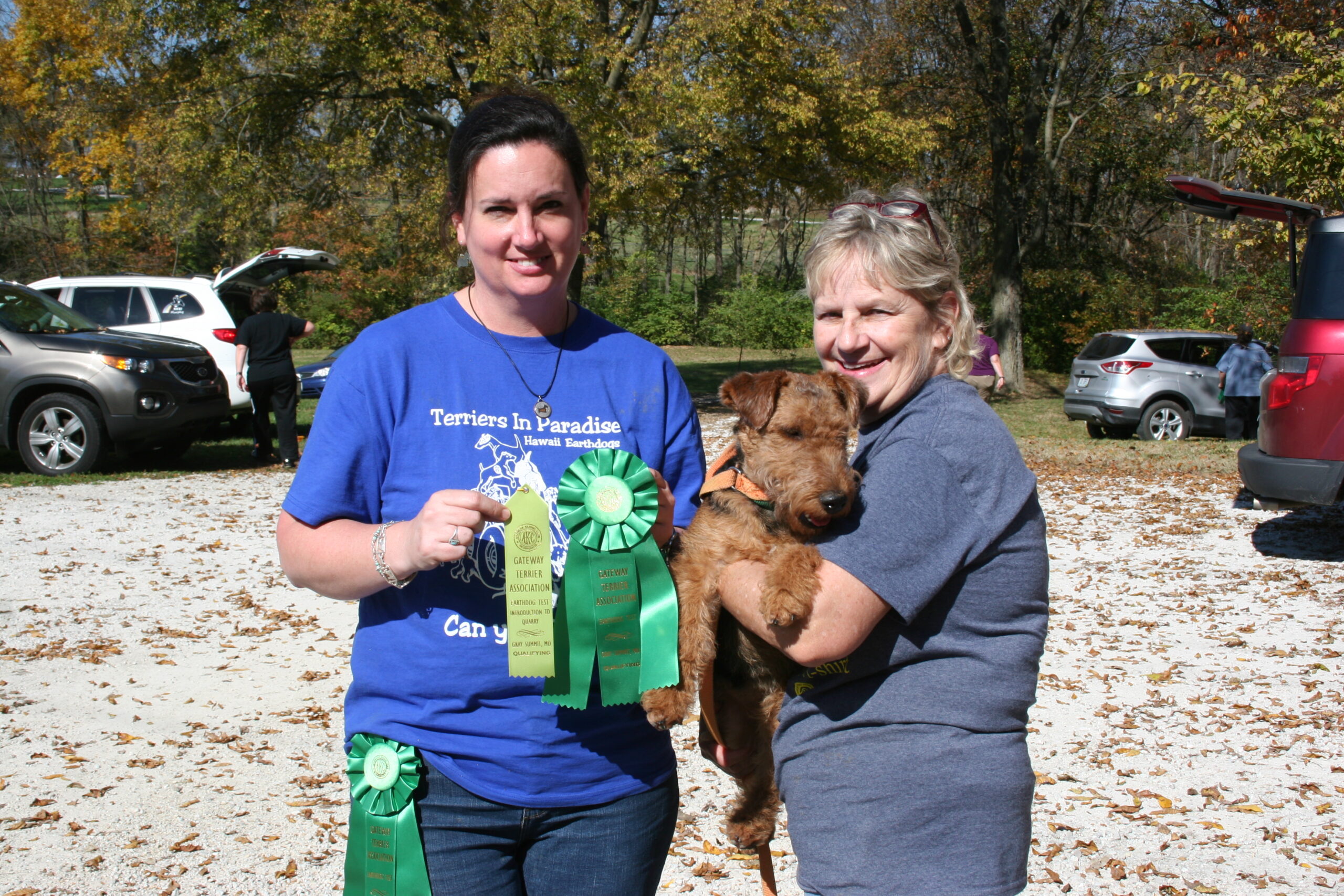 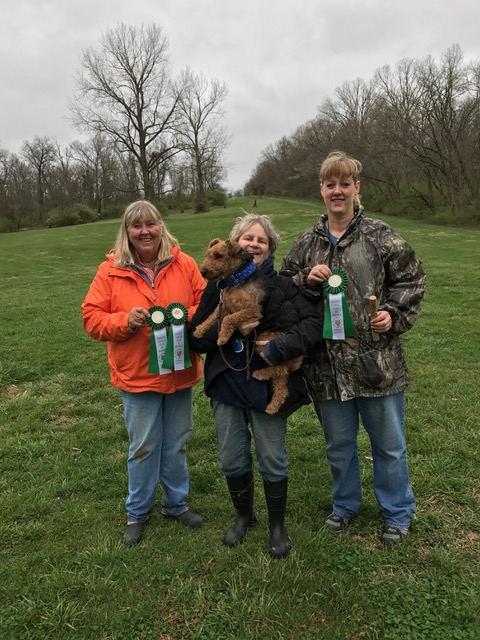 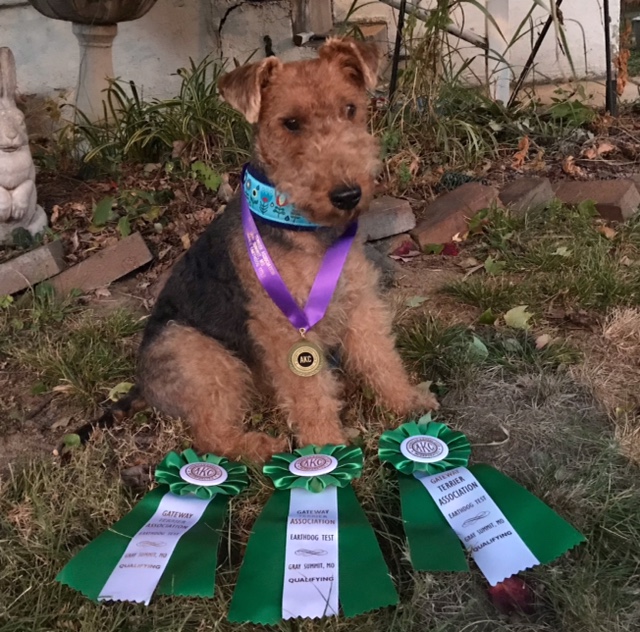 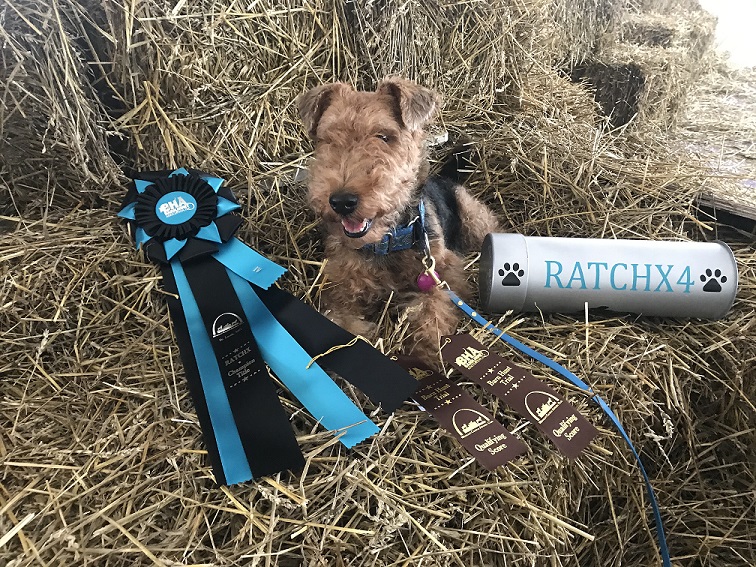 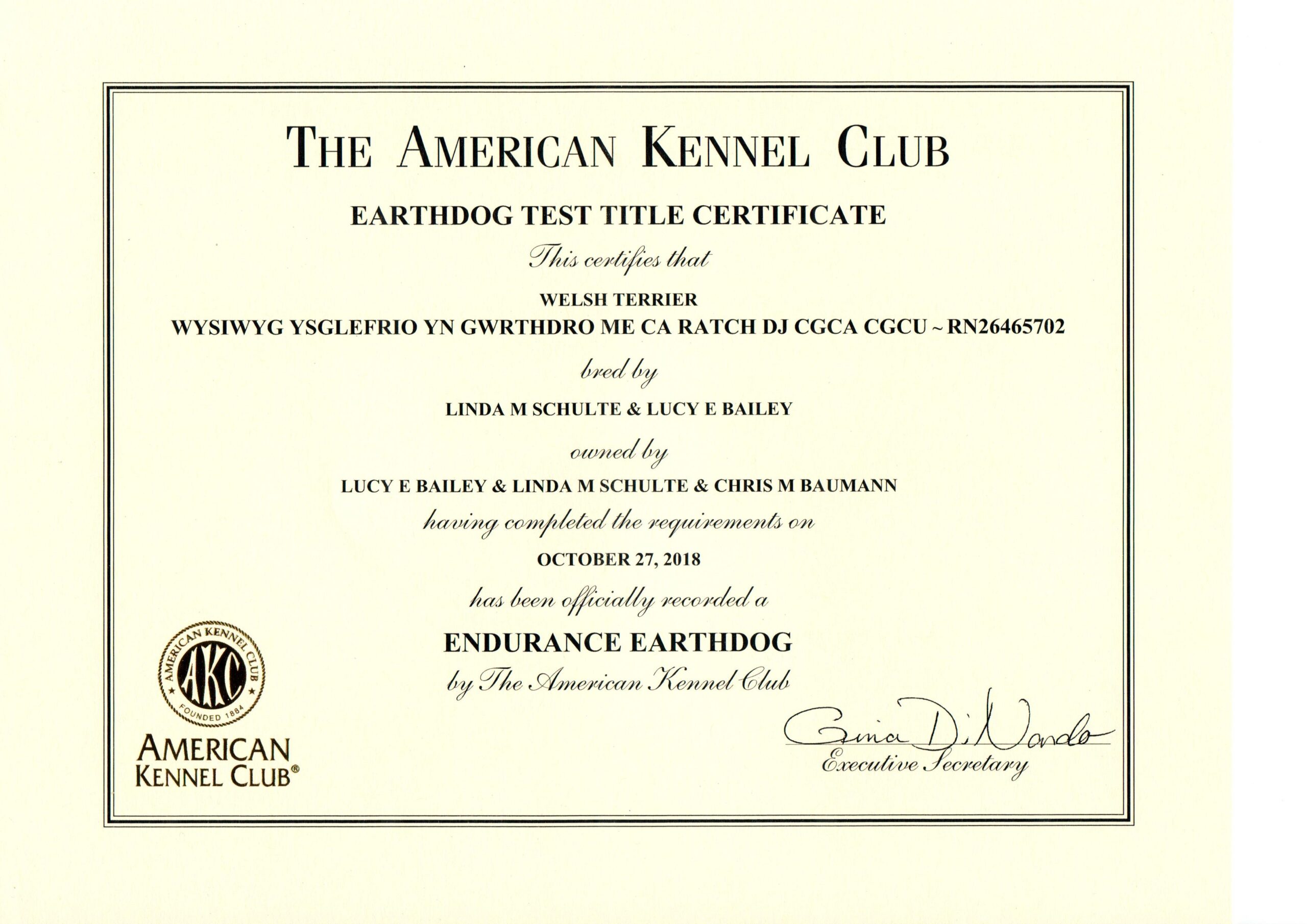 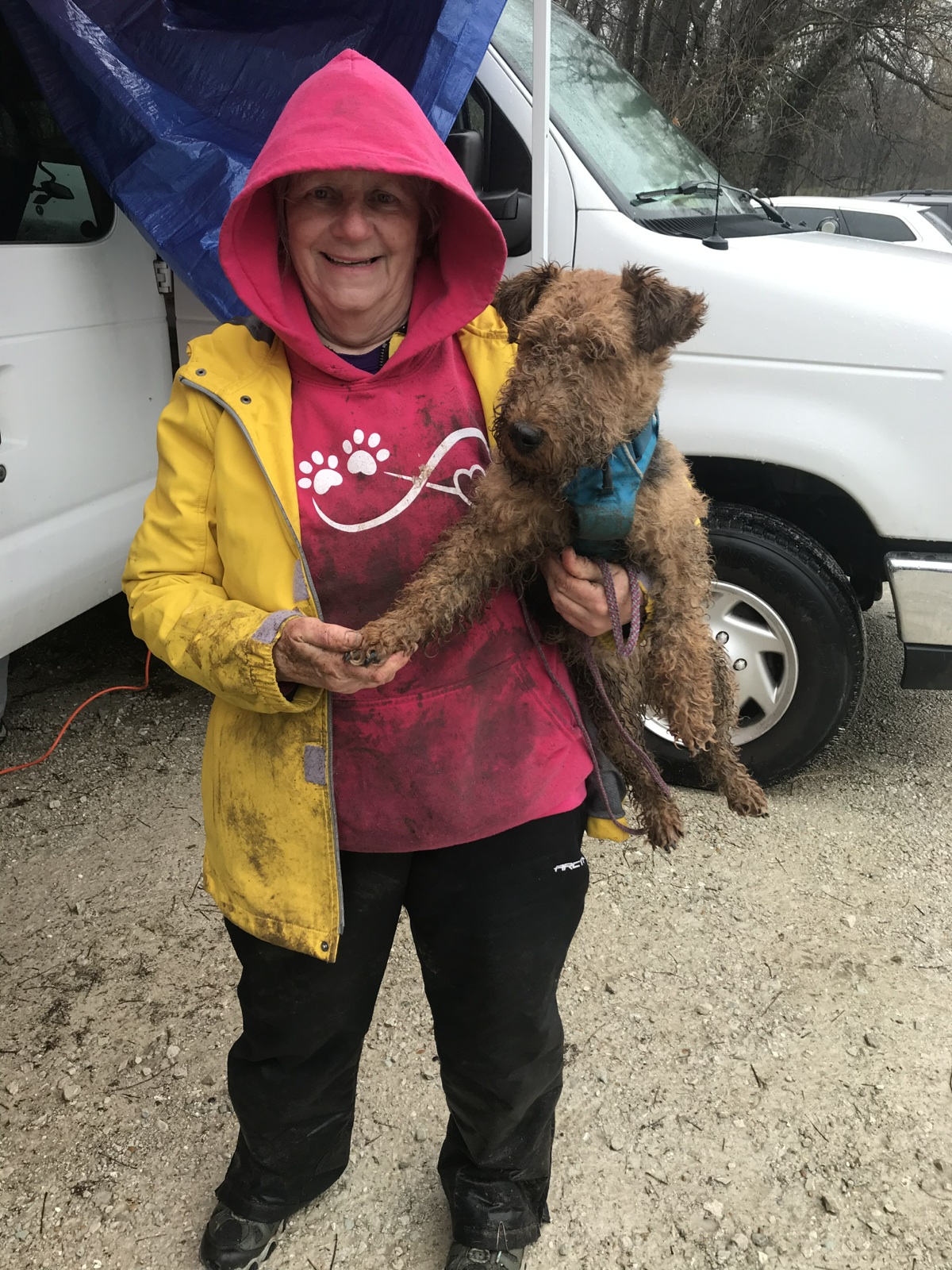 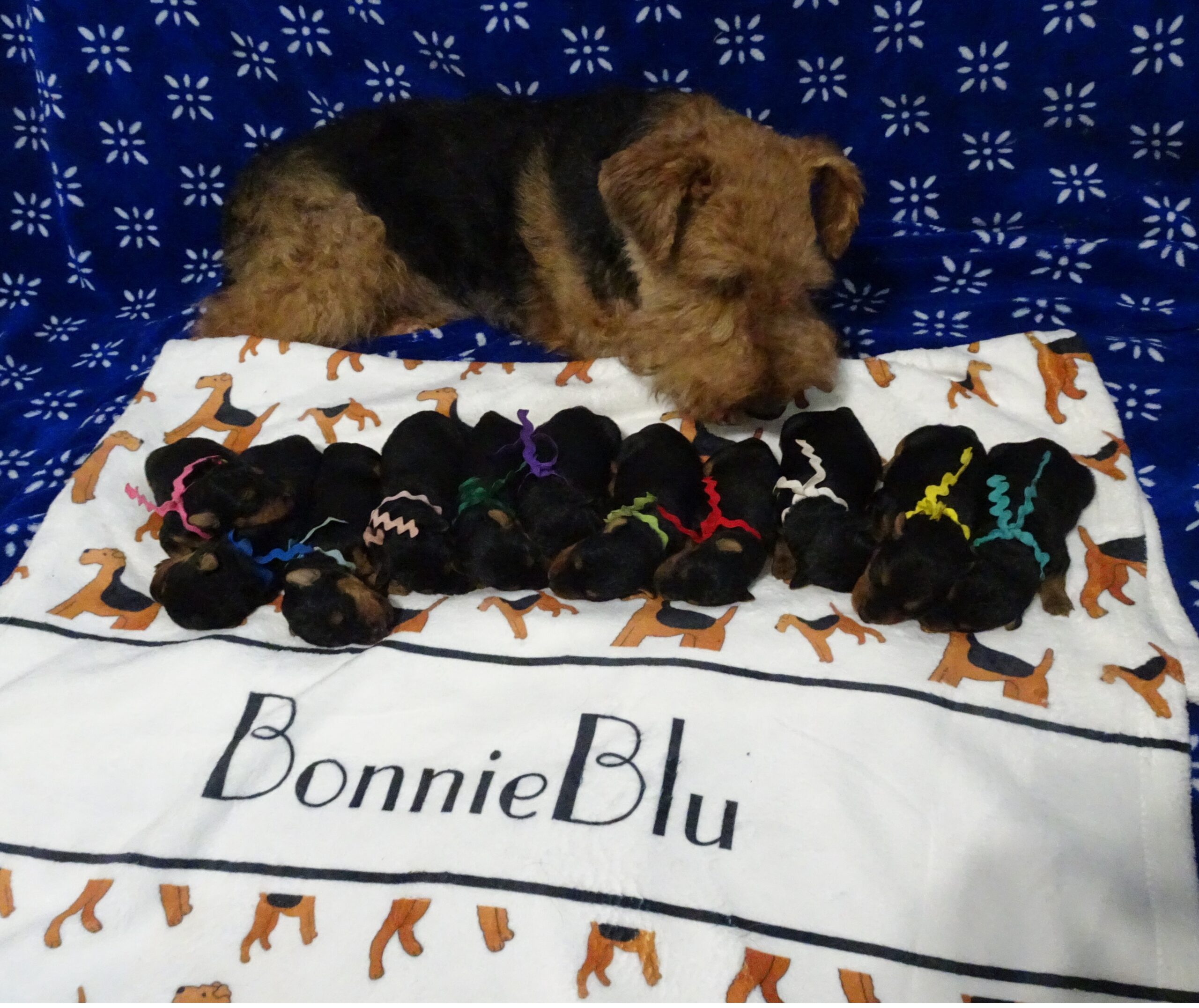